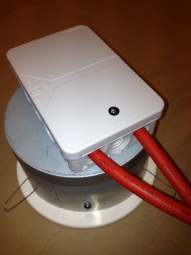 The by far most-preferred technique is the so-called loop wiring. From the central the speaker line goes in the field and the other side of this line is reconnected to the central.

Simply explained: what goes in can be measured on the other side again. A super reliable system. Within the evacuation central technology, this system will go one step further. Within a geographical zone or even per speaker, an isolator is mounted.

This isolator measures the signal on the incoming and outgoing cable side and it is tested for short circuit or interruption of the cable. In either case, the isolator will switch off the suspected cable when a problem occurs. The ring is no longer round then.

By means of the loop technology we are able to feed from two sides. On the picture below you can see how this is achieved.

In the standard situation is fed from the right channel to isolator 0. The signal then moves on to isolator 1

For example, if the cable between the second and the third isolator is short-circuited or interrupted, then the right side of the second isolator and the left side of the third isolator will interrupt the connection. Because it is fed from two sides, the whole field of speakers remains into force. If now the cable between the first and second isolator breaks down, speaker 1 and 2 will be out of order. The rest just continues.

‘You will understand, this is a super reliable and effective system’

The above situation is a real situation during fire. The field of speakers will be increasingly affected by the fire, but the system continues to operate.

Attention should also be paid to the installation of cabling in the isolator. In practice is has been found that pin connections could cause a malfunction sometimes. The cable core was sometimes incorrectly applied in the clamp. By using appropriate connectors, the costs of failure during the construction will decrease drastically. It is very important to keep this is mind in the offer phase. Simply select on price is too short-sighted.

Isolators are always system tied to the evacuation center. The isolator should, however, have a CE approval certificate in accordance with the standard EN54-17:2005. This is a product standard specially designed for isolators in fire safety systems. Only a EN54-16 certificate is insufficient.

Isolators can be placed per geographical zone or per speaker. Per speaker is always preferable. It is safer and cable technically much easier, ergo if each speaker has an isolator, the wiring still needs to be performed in functional integrity. The targeted return on investment, by using less isolators, is thus immediately negated.
Place comment
Edit article Dashboard Settings Website Design Article cached on Fri. 19 Aug 17:14
Renew cache