In the center of The Hague is a new and special building. The building with two towers of 140m high, is the new housing for the Ministry of Security & Justice and the Ministry of Home Affairs & Kingdom Relations. On Saturday, December 8th the combination building JuBi B.V. has transferred the work, after a record construction period of 47 months, to the Government Buildings Agency. With the new building, the employees of these ministries received a beautiful, representative place. 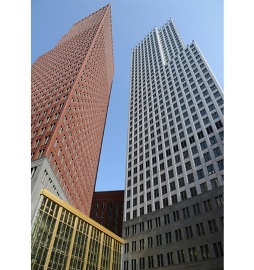 The evacuation system is constructed with standard TMCDAS system components. The central is physically large and consists of two system cabinets which are placed side by side in a technical area. The systems are controlled from the Siemens fire panel. In addition, the installation consists of two evacuation panels that are arranged at the reception and in the control room.

As usual, TMCDAS assembled the field wiring on the terminal strips. After commissioning there were nevertheless some technical problems: the amplifiers were blown up in a row. After investigation turned out that a bad batch of amplifiers were assembled. Due to our track & trace system we could easily find the error and it was decided to replace all amplifiers.
The reason was quite simple. The power modules were not installed properly on the cooling plates, and because of the heat they were blown up. The batch was isolated and we did this also by clients with the same amplifiers from the same batch. Meanwhile, the system is fully operational since January 2012.

The contract for this project was received in March 2011 from Imtech B.V. Especially in the preliminary stages, we delivered our knowledge and expertise in realizing the project. The collaboration with Imtech was very pleasant, since the first day. Imtech has indicated to be extremely content with the work realized by our company. We like to use this result as a reference.